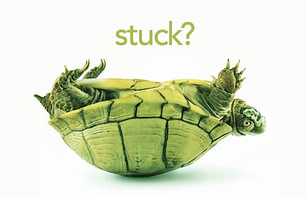 Feeling Stuck in your Old Ways ?

When we are blocked in an area of our lives it often is due to the fact that we feel safer that way. We may feel unhappy but that is easier to deal with than our fear of the unknown. We begin to change when the pain we experience in staying stuck is bigger than the anticipated pain of change.

A lot of fear comes down to our negative core beliefs : deeply held beliefs acquired some time in the past due to painful experiences. Becoming conscious and challenging these beliefs is the first step in the process of change.

For a moment, think about something you would really like to do or be right now but don’t feel able to. When you’ve got that, write it down. Do that now. Maybe you have always wanted to be an artist so write down “I am a capable and talented artist”.

The Trouble with Positive Affirmations

Now, in all probability a voice in your head has just emerged to criticize this statement bringing up all sorts of reasons why this is either impossible or a bad idea. Positive affirmations can give us a sense of safety and hope if we let them but at first you will probably feel they sound fake, embarassing or not right. No surprise there.  If you have spent all your life bludgeoning yourself with negative beliefs such as “I am worthless” or “I am not good enough” or “I must be perfect to deserve success” anything else will sound unfamiliar and syrupy or cheesy . So saying to yourself ” I am lovable just as I am” or “I am capable and confident” will surely sound untrue at first.

The problem with not accepting a belief because it doesn’ t sound right though is that feelings are a result of thoughts and if you want to change a feeling you have got to change the thought first. It’s a bit like the idea of “fake it til you make it”. You can’t wait to feel it to believe it, you gotta believe it to feel it! Luckily there are some ways to get around this obstacle, but all of these do involve a certain willingness to suspend judgement and take a leap of faith, as well as engage our rational mind doubting limiting old beliefs.

Seek out the Monster in your Head

So what is that critical monster in your head saying when you tell it you already are what you want to be ?( After saying your affirmation: i.e. “I am ok just as I am” )

Listen to the objections that come your way. What s the cruel voice saying inside your head ? “so you’re ok as you are… ah ah sure you are!”, “who are you kidding?”, “You are ugly”, “You will never change”, “You can’t do anything right”, “No-one will ever love you unless you are perfect”, etc etc… You will be amazed at the rotten things you can come up with. Write them down.  These are your personal negative core beliefs.

Once you have written them down you can start having a good look at where these beliefs come from: Mom and dad? Your school bully? The boy/girl you were in love with when you were ten? Teachers that pushed you too hard? Your little jealous sister ? Scan your blurts for possible sources. Time travel back into your life in five year increments and list by name who influenced you the most in each block of time.

Once you have identified these challenge their opinions. What self serving reason could they have had to have done or said what they did do or say? How did their own worldview influence them ? What did they believe about themselves ? What messages did they grow up with ? Remember this is not about blaming or condoning, just understanding and distinguishing their beliefs from what yours would be if you hadn’t accepted theirs as true. If there is still a lot of emotional energy involved in recalling these memories you might have to release it first so you can forgive them and yourself and move on.

Keep in mind that it is also possible your negative beliefs may come from subtle non direct messages received from your environment or from an experience of something that happened to you where others were not directly involved:

Maybe you felt different because of a situation you found yourself in; maybe you were abandoned by a significant other; maybe you fell ill and became isolated; maybe you were born with something that set you apart from others and you yourself came up with the negative conclusion that you were not Ok just as you were: the possibilities are endless and very personal.

Whatever your monster is, after it has been brought up to the light of day you can start working on challenging its critical voice and changing those negative beliefs that keep you stuck and unhappy. If you would like help with a practical cognitive behavioral approach to this, read this article about “how to get rid of negative core beliefs”.

How to Fall in Love with Discipline and Get Motivated

Master the Stage & Magnify Your Presence